This week we’re going to look at one of the many business activities you’ll have the ability to perform as a producer: releasing a single.

Why release a new single? Well, one obvious answer is money. If the single is a success, you stand to make a sizable chunk of cash from direct sales. But there’s potentially more than just money to be gained: a successful single also increases your group’s exposure, creating opportunities to acquire new fans. 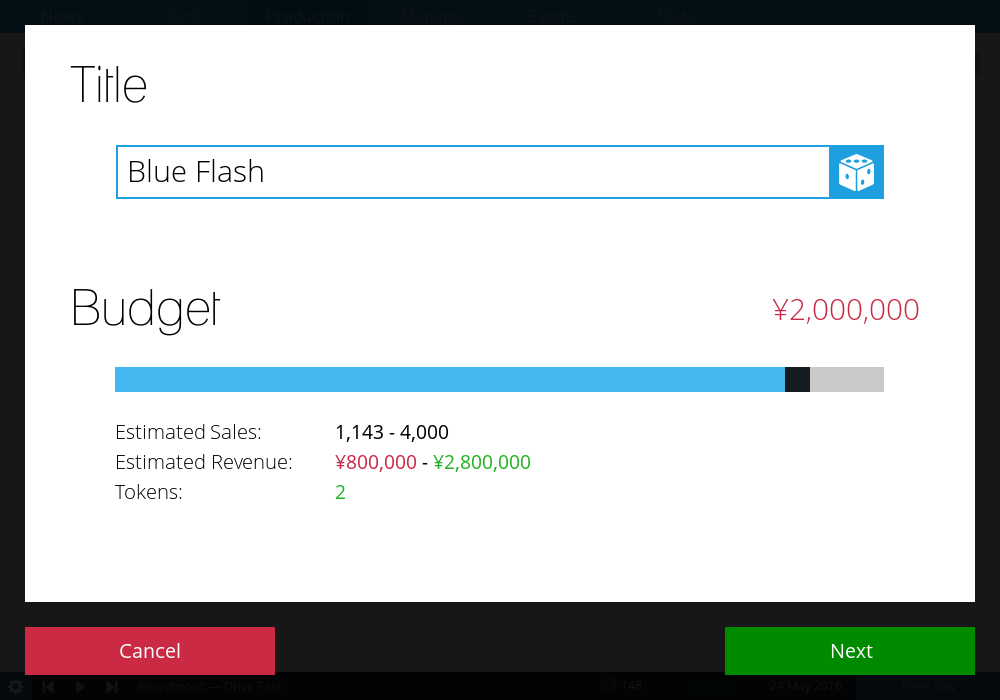 First, we need to plan the budget to promote the release of the new single. You’ll receive a set number of “tokens” that you can use on promotional activities based on how much money you decide to spend. Note that each activity requires a different number of tokens, so your budget determines not only the number of activities you can plan, but also which activities are available. A bigger budget means more promotion and greater potential sales, but with increased potential reward also comes increased risk — you don’t want to spend the entire month’s budget on a single only for it to completely flop. It’s up to you to plan your budget strategically.

Once we’ve planned the single, we can see estimated revenues based on our planning. These estimates can be helpful when planning your budget, but remember, they’re just estimates. Sometimes things can flop despite careful planning, but other times you can get an unexpected hit that performs above expectations. 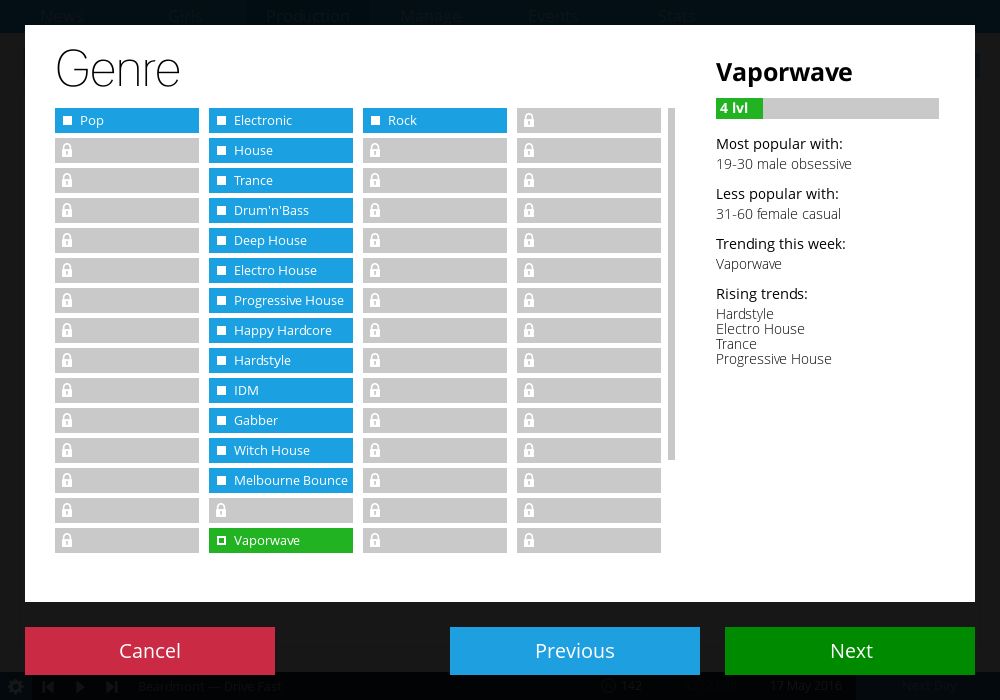 Next, what kind of single do you want to release? Here, we’ll pick a genre. The genre you choose will have an influence on the kind of fans that your single will appeal to. A rock or pop single has the potential to reach a wider audience, but pursuing more niche genres may allow you to tap into a more dedicated fanbase.

One of the benefits of expanding your musical repertoire is gaining the ability to follow trends. Right now, it looks like “vaporwave” music is growing in popularity. It seems like the time we spent to unlock this specialized sub-genre of electronic music has paid off. Keep an eye on the rising trends, train your group accordingly, and you can position yourself to profit when certain genres become popular.

Of course, there are benefits to specialization. As they say, “practice makes perfect,” and if you choose to focus on a specific genre, you’ll see increased success when you release singles with that tag. It’s nice to have the ability to follow trends, but it may not be in your best interest to become a “jack of all trades, master of none.” 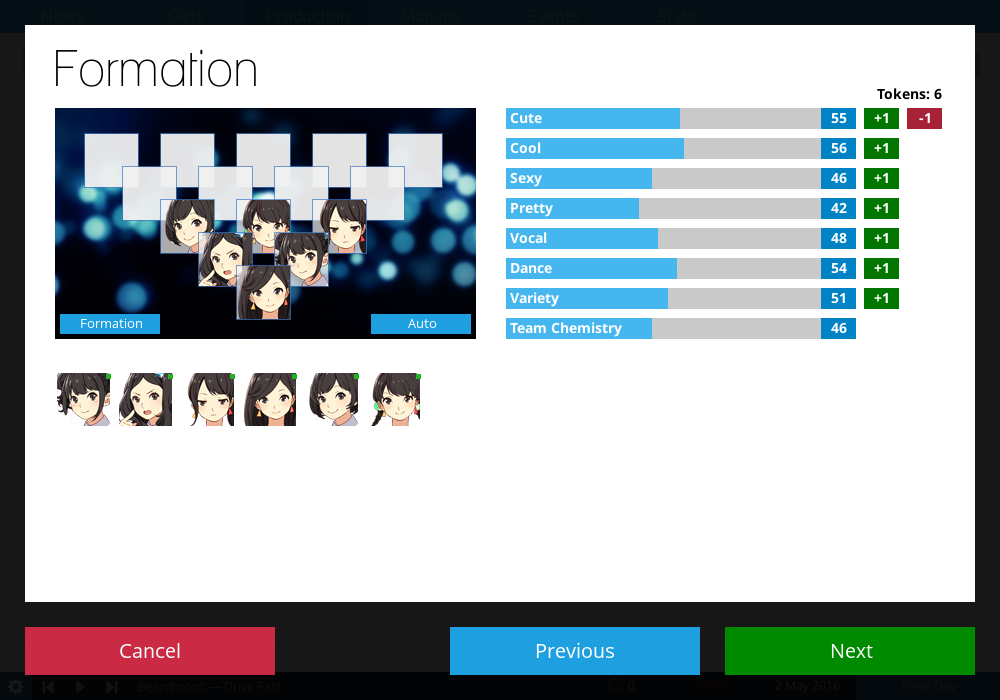 Once we’ve chosen the genre of our new single, we need to set up a formation. Initially, your promo video can have up to 15 girls, but you’ll set up a formation to highlight just a few of them. The success of the single is affected by the stats of the girls who participate, and girls who are placed closer to the center of the formation have a bigger impact on the song. Girls closer to the center of the formation also get a larger PR boost from the single as well.  This is another place where we have the ability to use “tokens” for a temporary stat boost on this performance.

Releasing new singles and featuring more prominent members of your group can be a great way to capitalize on an idol’s greatest asset — her popularity. However, a new single featuring a lesser-known name can also be a way to promote younger up-and-coming talent. 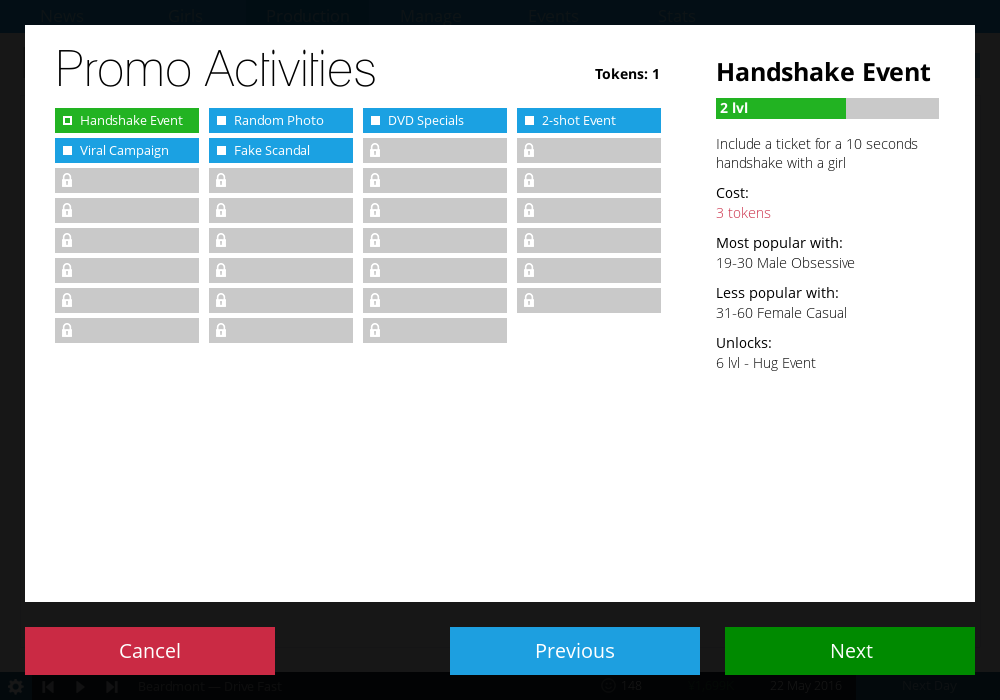 Now we get to choose how to use our budget. We could promote our single by bundling a ticket to a handshake event with each copy. (Some superfans have been known to purchase multiple copies of such singles in exchange for the privilege of multiple handshakes.) Another option is to bundle in a random photograph, which may spur some superfans with a “collect them all” mentality to purchase multiple copies.

If you’re looking for an inexpensive way to drum up publicity, you have the choice to create a fake scandal — that ought to get you featured in a few headlines. Be wary, however: while a fake scandal is a cheap and effective way to get attention, it also has the potential to backfire and cause your group to lose fans. Not all news is good news. 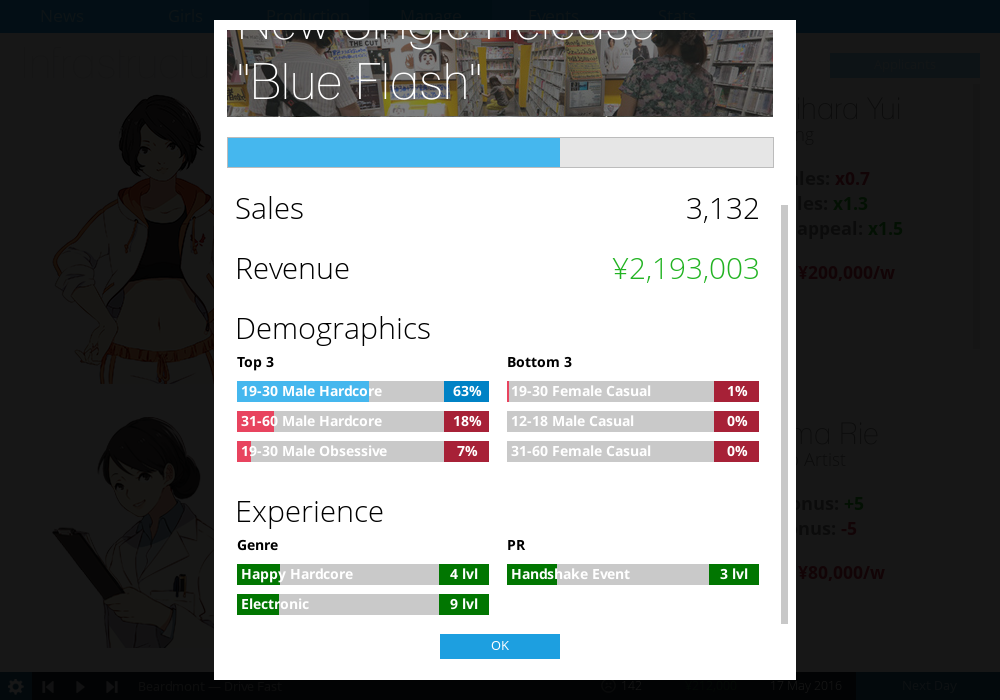 Here, we see the results of our single’s performance.  It looks like our results were above expectations, and the revenue was enough for us to cover our expenses while netting us a bit of profit. Of course, money isn’t the only benefit we got from this — our lead singer got more exposure and experience, and that should set us up for greater success later down the line. Hopefully we’ll be even better tomorrow than we were today.

As you play more, you’ll discover the best ways to increase your odds of success and tailor your singles to achieve whatever your goals happen to be. It’s up to you to strike a balance between short-term profits or long-term growth.

As you play the role of manager, you shouldn’t forget that the “assets” that you’re managing are people, too. Some more popular and established girls may have expectations about who will be featured in new singles, and they may take it as a personal slight if you don’t choose to feature them. Conversely, if one popular girl seems to be getting attention to the exclusion of everyone else, others may grow to resent it. And though being featured on a new single can be a great opportunity for a newer singer, some beginners may not appreciate being thrust into the limelight so soon.

Do your best to prevent resentment and jealousy from fostering within the ranks of your agency. It’s your responsibility to help them understand that it’s not personal, it’s just business.

Idol Manager is an upcoming business sim / dark comedy set in the Japanese idol industry. Sign up for our email list to get notified when we release, or follow us on social media for regular project updates.