One of your jobs as a talent agency is to act as the liaison between the girls you manage and the people who want to do business involving them. It’s up to you to make these decisions on their behalf. 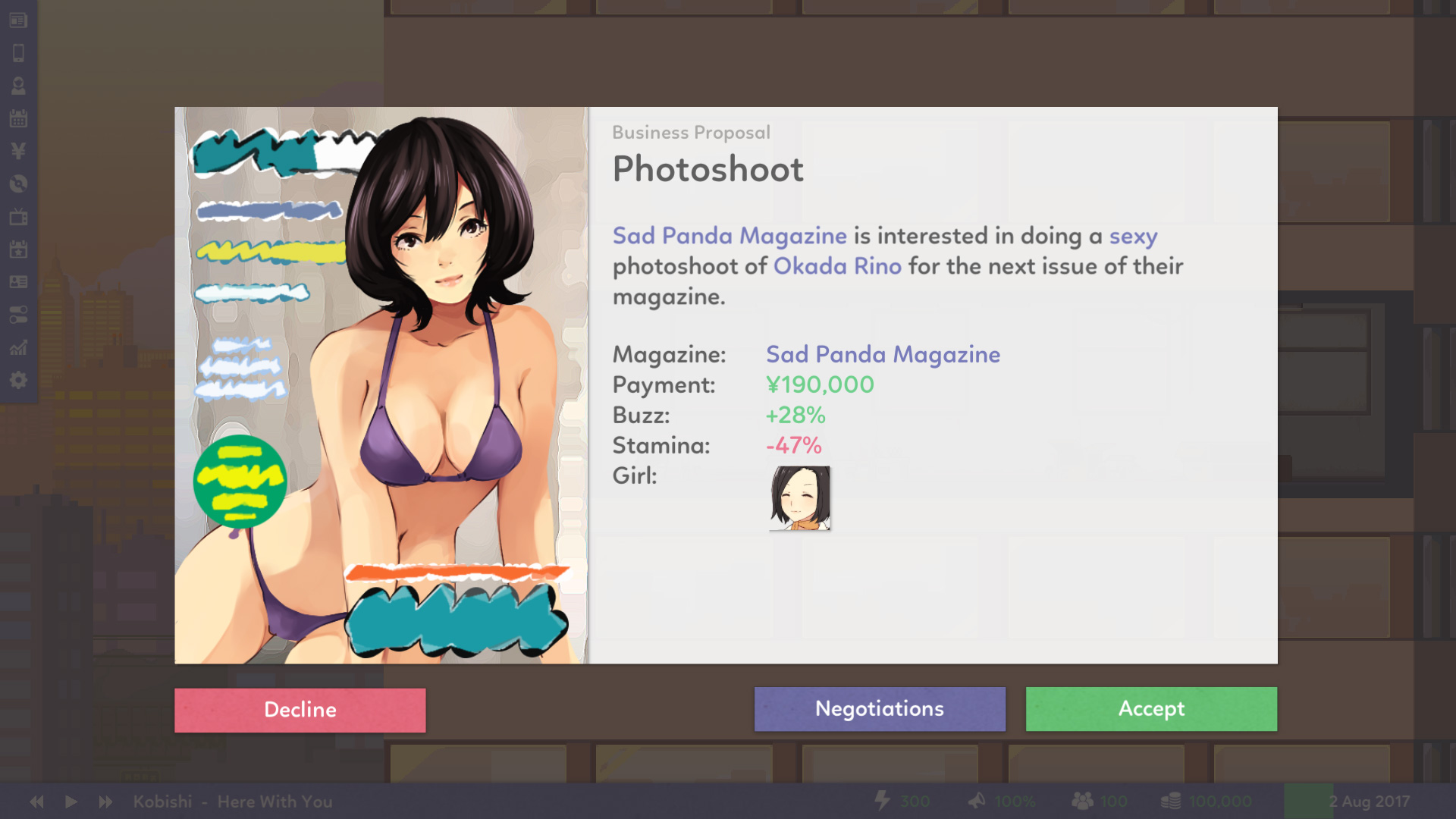 From time to time, you’ll be contacted by business who want to use the face of your talent to promote their own business. Sometimes, these requests come from magazines who are looking for a photoshoot, or advertising companies looking for someone to appear in a commercial. If you’re lucky, your idols may even be offered acting roles in TV dramas or movies.

Each business proposal comes with its own set of rewards as well. Advertising gigs tend to pay well, but let’s be honest: the people who appear in advertisements are in it for the money. Conversely, an acting role might not offer as much payment up front, but could translate into increased exposure. Things like photoshoots also have the potential to change a girl’s public image, which could shift her demographic appeal — for example, a “sexy” photoshoot might increase a girl’s popularity among the young adult male demographic.

When it comes to business proposals, not every offer is a “take it or leave it” choice. Sometimes, an offer seems appealing, but it doesn’t pay quite as well as you like — in situations like this, you can sit down at the negotiating table, and see if you can work out a more favorable rate. That said, be careful that you don’t get too greedy; some parties will withdraw their offer if you try to drive too hard a bargain, and failing in a business negotiation could also make them less likely to come to you with business proposals in the future. It can be a tough world out there, so try to make friends, not enemies.

These business proposals aren’t just offering you free money — they’re asking to use your talent, and using that talent comes at a cost. Going to a photoshoot or a film shoot takes time out of a girl’s schedule, and it also uses some of her stamina.

Stamina comes in two types: physical and mental.  Most activities are just physically taxing, but if she runs out of physical energy on set, things can start to take a psychological toll as well. Keep an eye on a girl’s stamina before sending her out to a film set — if her physical stamina falls to zero, she runs a risk of getting sick, which could cost her days in recovery, time that she can’t do things like train, practice, or go to public events. A girl’s mental stamina is even more important — if a girl gets too stressed, she can fall into depression, which can be much more disruptive than just dealing with a simple head cold or physical injury.

Every girl is different, and an acting gig that seems arduous and draining to one girl might seem exciting and fun to another. It may be helpful to take girls’ individual preferences into account when deciding whether or not to accept business proposals on their behalf. 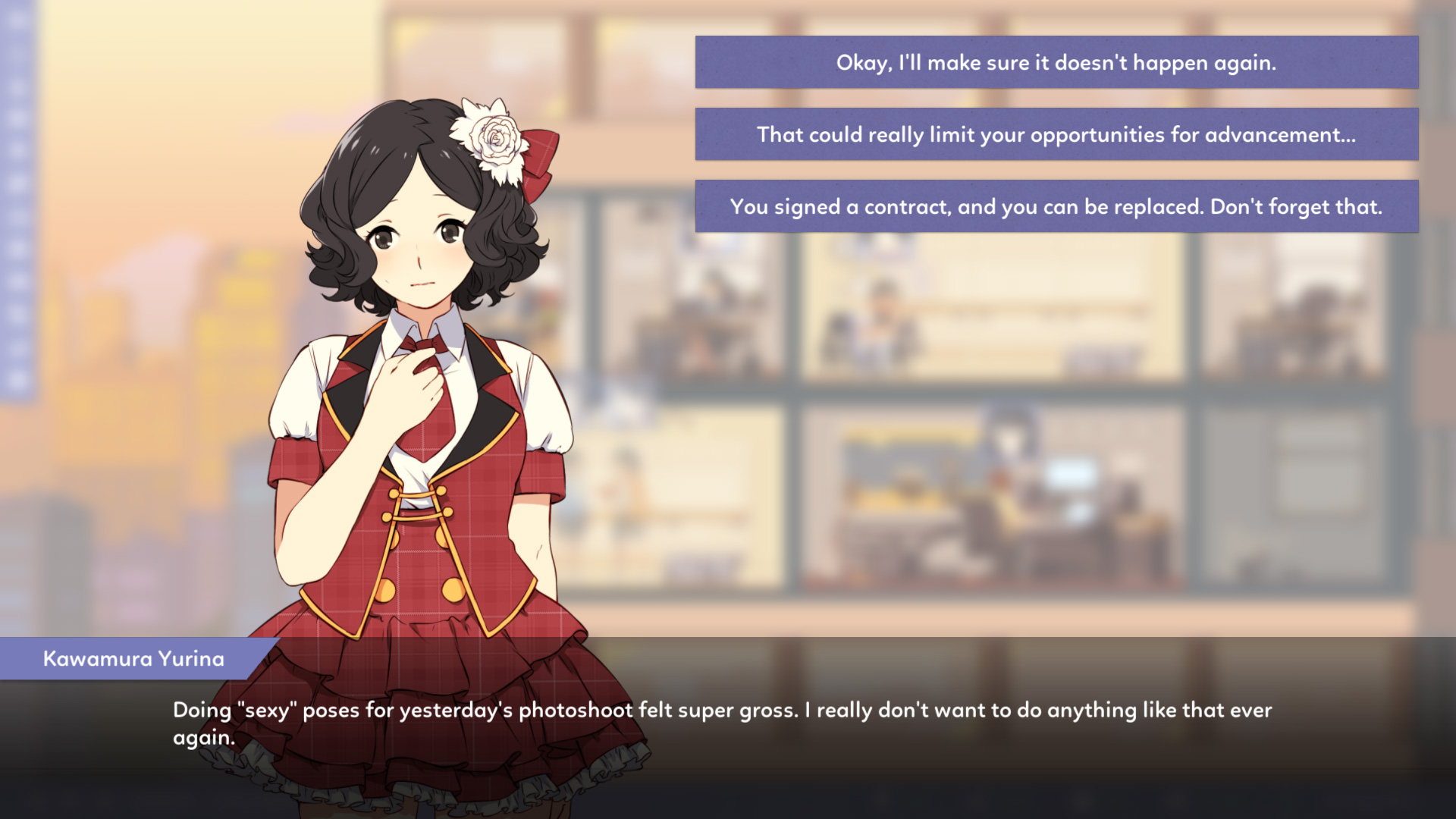 Of course, if people only showed up for work when they wanted to, nothing would ever get done. You’re the boss, and you decide what jobs your idols show up for, but that doesn’t mean that they have to enjoy every assignment. Whether you chose to prioritize the health and happiness of your talent or the fame and fortune of your agency is up to you.

Before you sign that contract, take a moment to read the fine print. Most of them come with some sort of morality clause. When a company launches an ad campaign and chooses a face to represent their brand, the last thing that they want is for that face — and by extension, their brand — to be associated with scandal. If your idol appears in a commercial, and then somehow their reputation becomes tarnished, that commercial isn’t just worthless: it’s worse than worthless, and you can expect the advertising company to come after you seeking a financial settlement.

Be careful what you sign — an offer that looks like “free money” now could come back to bite you in a month’s time if you’re not careful. 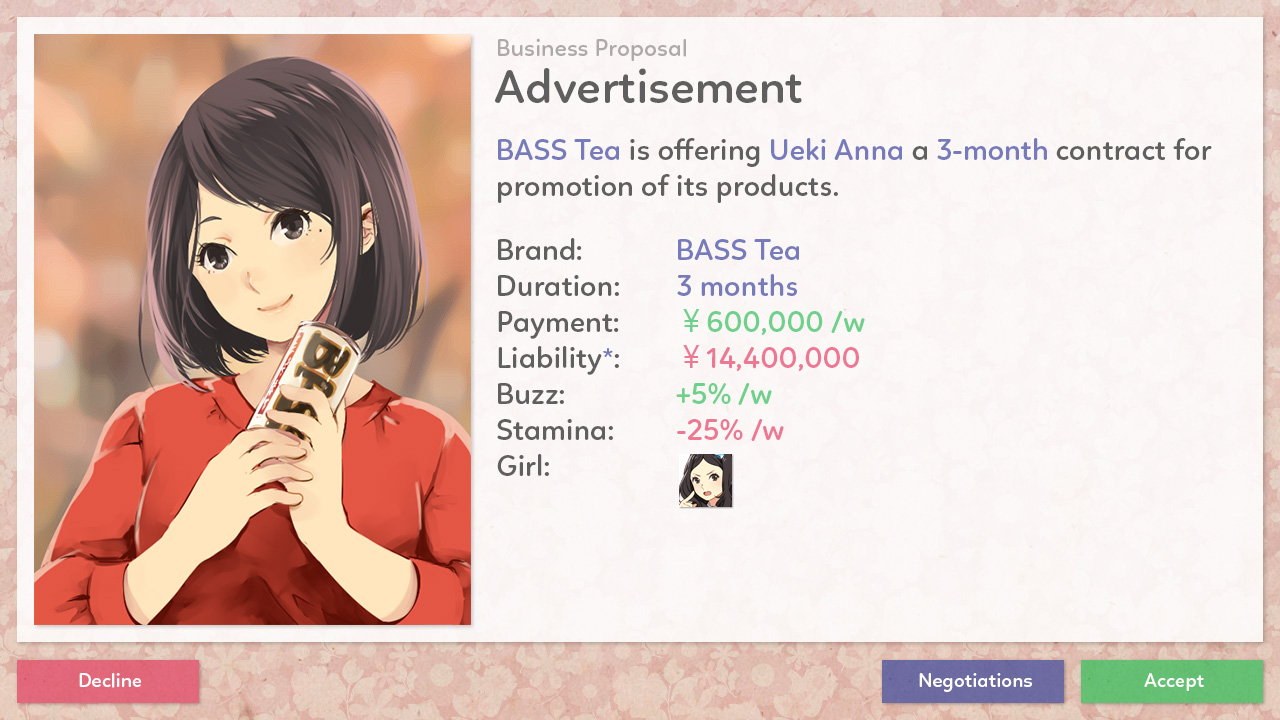 Idol Manager is an upcoming business sim / dark comedy set in the Japanese idol industry. Sign up for our email list to get notified when we release, or follow us on social media for regular project updates.